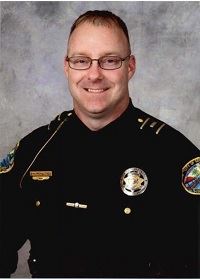 Karl Hoglund moved to Sebring from Northern Wisconsin in 1986 and attended Sebring High School as a sophomore, ultimately graduating in 1989. Upon graduating high school, Karl joined the United States Marine Corps Reserves and attended basic training at Parris Island, South Carolina. After finishing specialty training, he returned home to attend college at South Florida Community College. Upon entering his second however, his Marine Corps unit was activated and deployed to Saudi Arabia and Kuwait in support of Operation Desert Shield / Storm.

Upon returning to Sebring after the Gulf War, Karl returned home to Sebring, where he worked for a local electronics retailer and began attending the Basic Law Enforcement Academy at South Florida Community College. While in the academy, Karl applied and was ultimately hired by the Sebring Police Department in May 1993 as a police officer. Shortly after being hired, Karl received an Honorable Discharge from the Marine Corps as a Corporal.

As a member of the Sebring Police Department, Karl was assigned to various divisions of the agency including Patrol, Investigations, and Administration, and he was ultimately promoted to the rank of Police Lieutenant. In addition to working for the department full-time, Karl pursued his formal education attaining an AS Degree in Criminal Justice through South Florida Community College in 1999; a Bachelor’s Degree in Organizational Management Warner Southern College in 2001; and a Master’s in Business Administration Warner Southern College in 2003.

He has been an active law enforcement trainer, working for South Florida State College as an adjunct professor since 2004 where he specializes in management and leadership training. He also serves on the college’s Criminal Justice Advisory Board. Karl is a graduate of the FBI’s Florida Executive Development Seminar and the FDLE Executive Institute’s Senior Leadership Program. He has also been the co-owner of a local photography business that has been active in the Sebring Area since 2006.

In June 2016, the City of Sebring advertised the upcoming retirement vacancy for its’ then current police chief and Lt. Hoglund was selected and ultimately appointed to assume command on January 1, 2017.

Karl enjoys several outdoor hobbies, which include fishing, hiking, photography, and “”. Karl and his wife Belinda have been married since 2004, and their son Kyle attends elementary school locally.